I had a tremendous amount of fun writing and illustrating PIGNIC. Here's a peek behind the scenes... 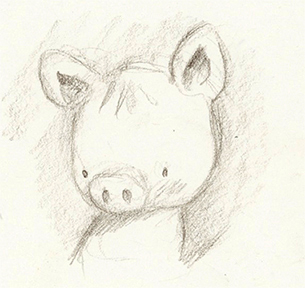 One of a million pig character sketches. 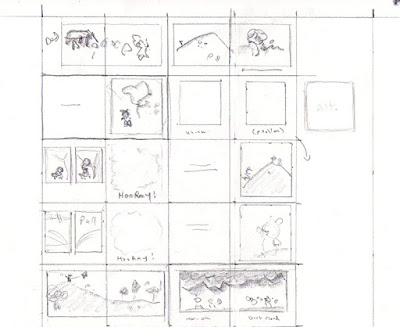 A sample from the initial thumbnail layout. 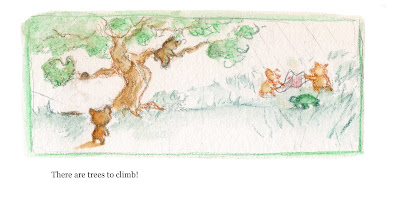 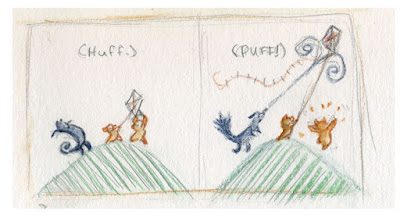 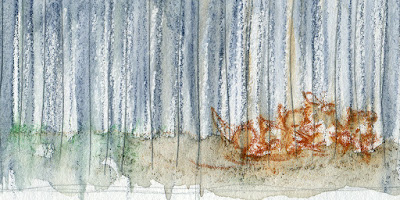 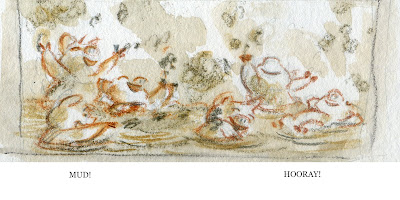 The dummy consisted of very small sketches drawn with Derwent Inktense pencils which are
water-soluble. I liked the results so much that I used the same pencils for the final art.

You can find a copy of PIGNIC at your local bookstore or here.

The official PIGNIC launch party will be at Children's Book World on Saturday, June 2nd at 1 pm!

Posted by Matt Phelan at 1:07 PM No comments: 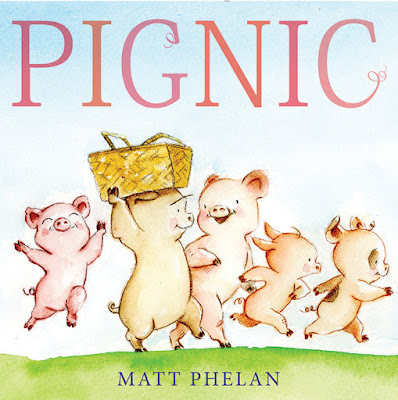 My latest picture book as both author and illustrator is finally here!! This may be the youngest book I've done and I'm very proud of it. It was a joy to make from beginning to end.

Here are some nice reviews:

And here's a swell feature on Kirkus!

WHAT ARE YOU WAITING FOR? 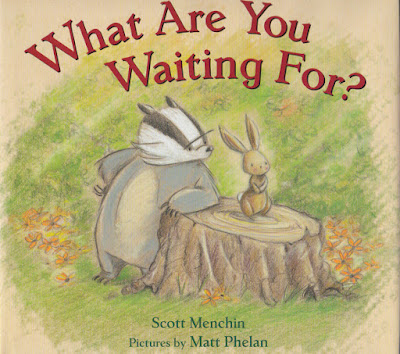 I was thrilled when editor Neal Porter sent Scott Menchin's picture book text What Are You Waiting For? to me. Written as a vague conversation between two unnamed (and undescribed) characters, Scott left a great deal to the illustrator which is a wonderful thing. Aside from the What of the title, I had free reign to come up with characters and business for each page and each question.

I decided to make the characters animals. At first they were sweater-wearing bears... 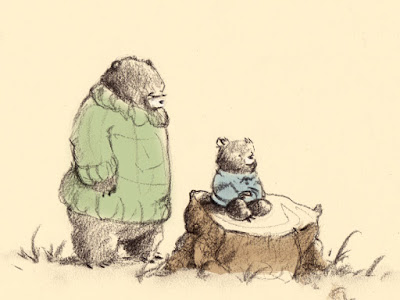 But, although I love drawing bears, I thought that maybe there were too many bears in picture books and I should try something new. So... badger and bunny. 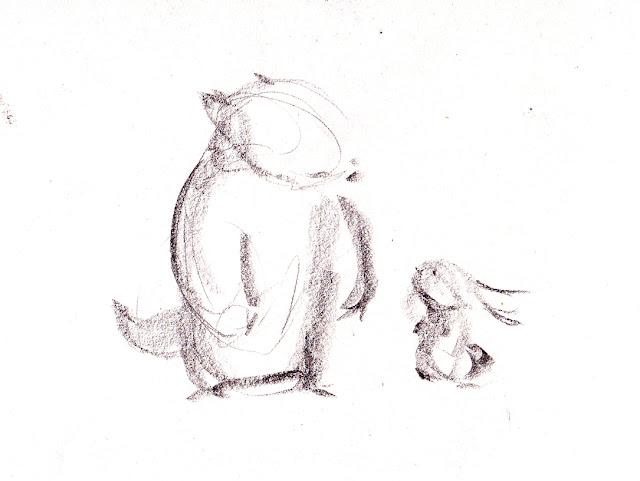 Turns out, lots of illustrators were also thinking about badgers and their books also came out this year. Badgers in the zeitgeist, I suppose.

Finding the visual story to go along with Scott's dialogue was the key. I decided to play each question against the two characters noticing something along their walk. In that way, the waiting became an opportunity to observe their surroundings, to be present in the moment (even though the badger is mostly impatient for the arrival of the What).

This is the image that came to me for the "Is it old?" question and subsequently led to the rambling and observing visual story: 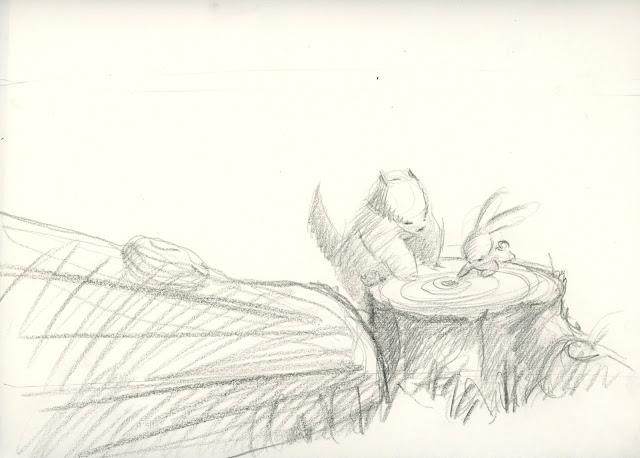 Here are some more sketches: 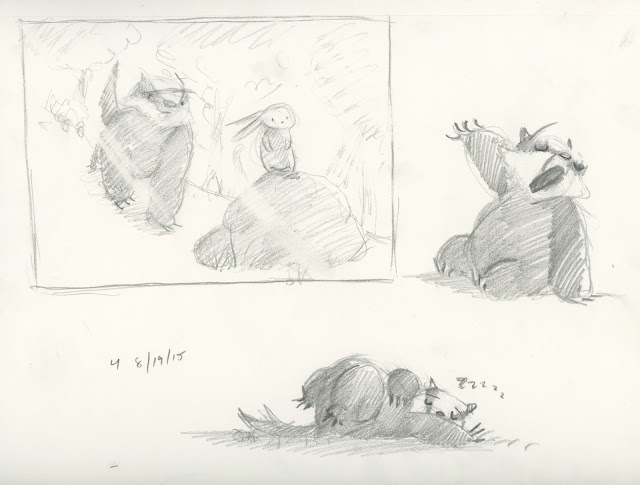 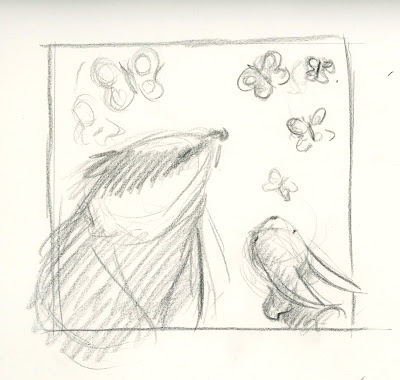 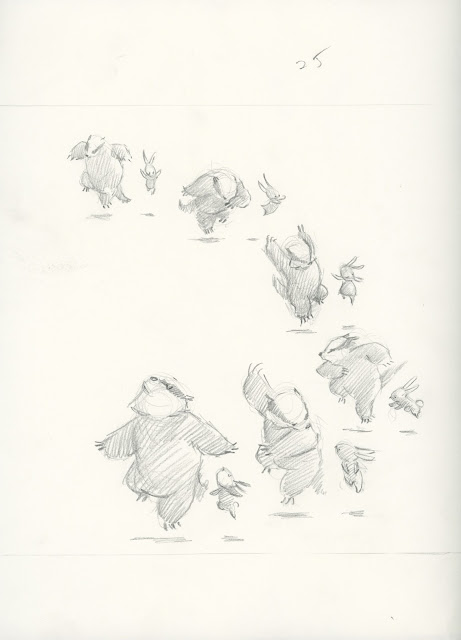 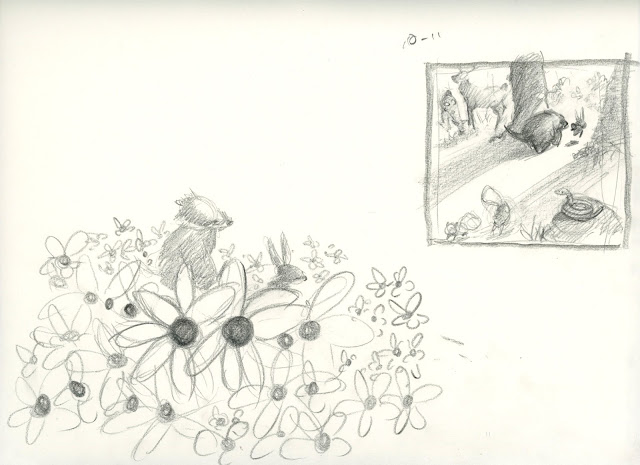 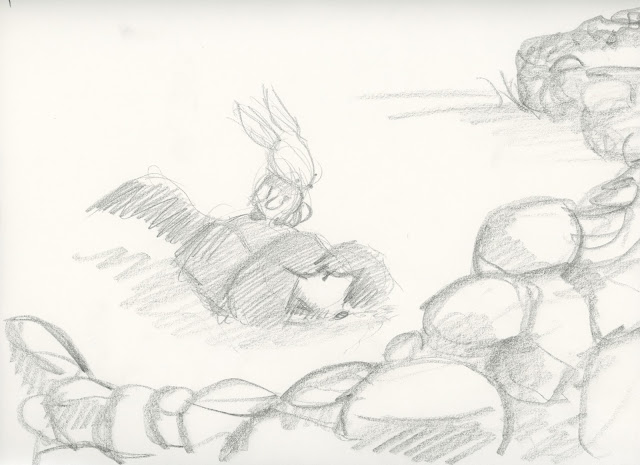 For the final art, I decided to work as simply as possible to reflect the tone of the book. I used Faber-Castell Polychromos pencils and pastels on Strathmore Toned Tan paper. I used a similar technique years ago for Alice Schertle's Very Hairy Bear. It was wonderful to work this way again. Pure and simple drawing. It was a pleasure.

Here are some finals: 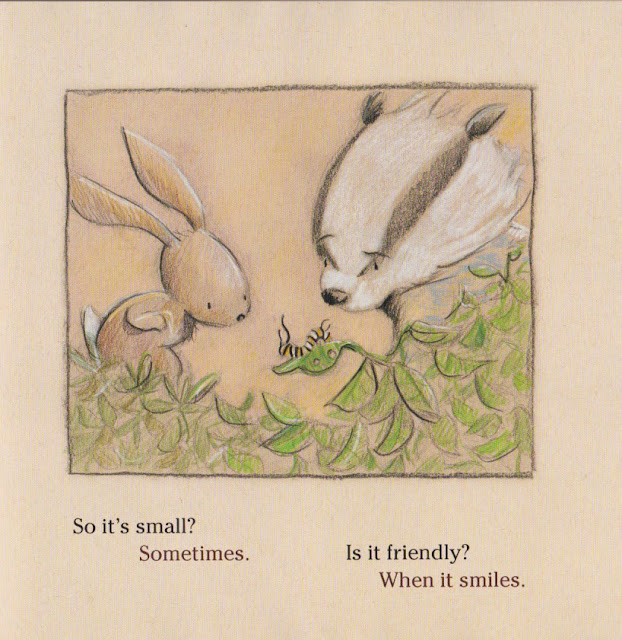 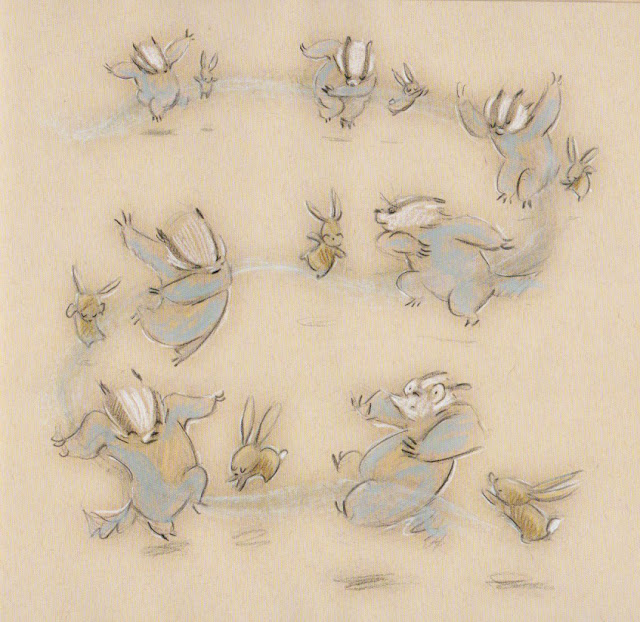 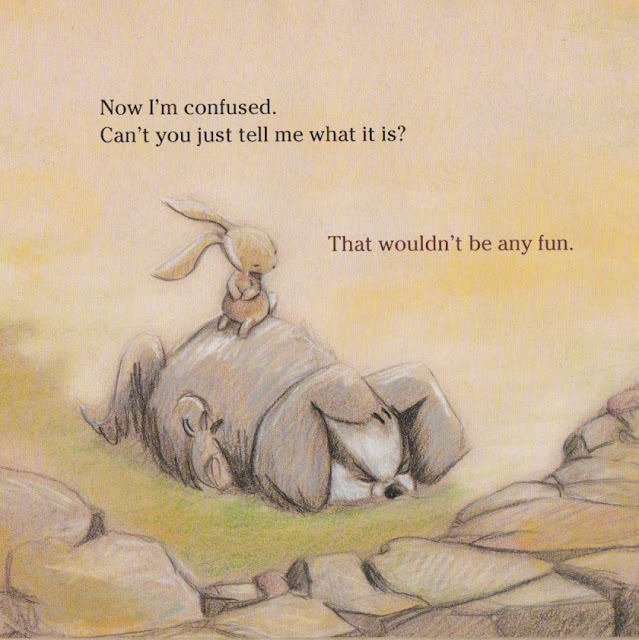 I was hoping for a simple, quiet approach to the cover but it was not to be. Here's my initial cover concept: 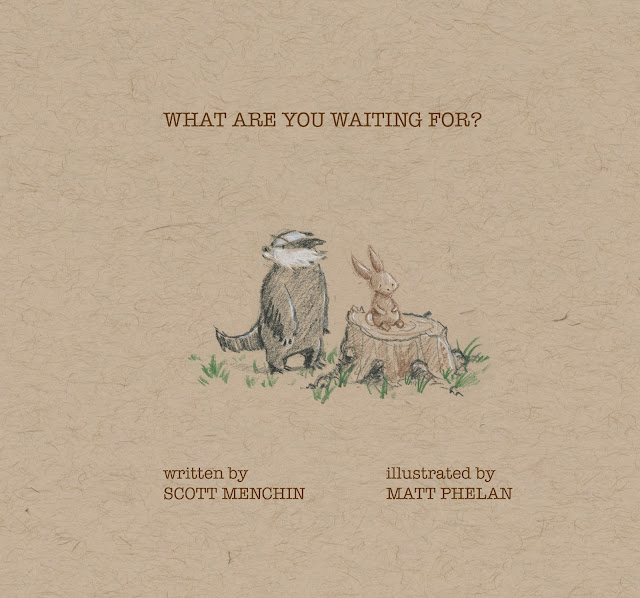 WHAT ARE YOU WAITING FOR? was a great experience and one of my favorite of my own books. I hope you check it out.

Here's what Kirkus Review had to say:

"...The book’s well-thought-out design combines double-page spreads, spot, and bordered illustrations. The final illustration, very small and surrounded by the toned white space of the page, metaphorically hints at possibilities to be discovered beyond borders.

A quiet, thoughtfully designed picture book with a strong message."

Labels: badgers, picture books, process, sketchy, What Are You Waiting For? 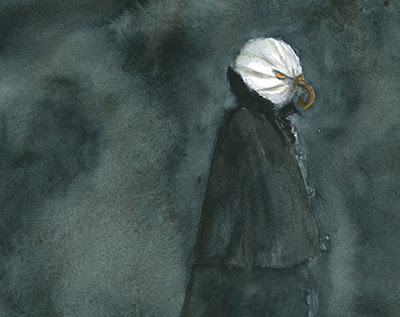 Posted by Matt Phelan at 1:55 PM No comments: 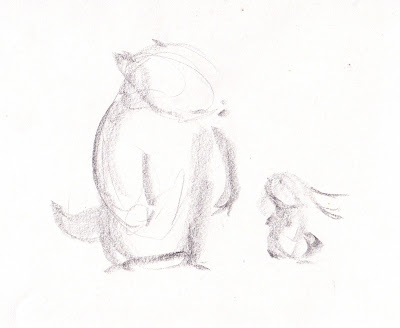 "The Chinese consider it childish to look for details in pictures and then to compare them with the real world. They want, rather, to find in them the visible traces of the artist's enthusiasm."

Posted by Matt Phelan at 9:31 AM No comments:

Brush with a Gorilla

Experimenting with Chinese brushes and Marie's watercolor on Sumi-e paper... 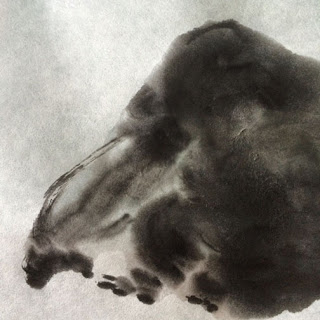 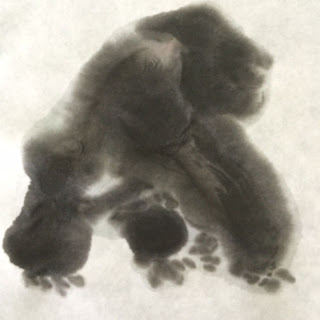 Posted by Matt Phelan at 1:40 PM No comments: 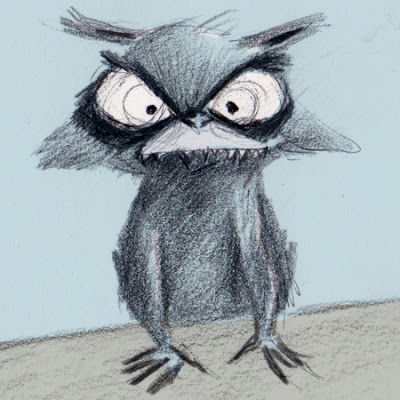 Posted by Matt Phelan at 9:43 AM No comments: